Pope calls for 'two-state solution' during meeting with Abbas 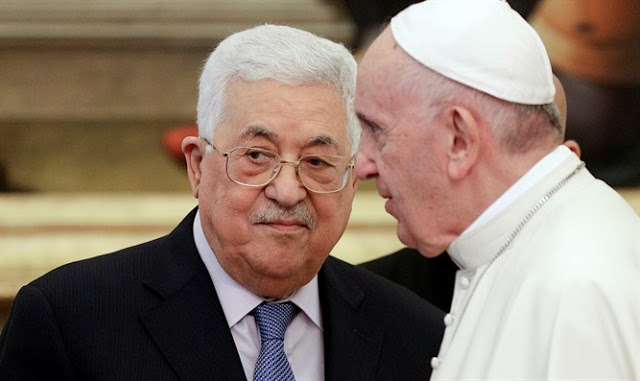 Pope Francis on Monday called for the implementation of a “two-state solution” to solve the Israel-Palestinian Arab conflict.
His comments came during a meeting with Palestinian Authority (PA) chairman Mahmoud Abbas at the Vatican.
The PA’s official news agency Wafa said that Abbas briefed the Pope on the latest developments in “Palestine” and the implications of the US decision recognizing Jerusalem as Israel’s capital and moving its embassy to the city.
He also briefed him on alleged “Israeli violations against the Palestinian people, their land and holy places, particularly in Jerusalem.”
A statement issued by the Vatican said the two discussed “the path of reconciliation among the Palestinian people, as well as the efforts to reactivate the peace process between Israelis and Palestinians, and to reach a two-state solution, hoping for a renewed commitment on the part of the international community to meet the legitimate aspirations of both peoples.”
“Particular attention was reserved for the status of Jerusalem, underlining the importance of recognizing and preserving its identity and the universal value of the holy City for the three Abrahamic religions," the statement said, according to Wafa.
The Vatican recognized “Palestine” as a state in 2013. Last year, the PA opened an “embassy” in the Vatican. This occurred after an accord between the Holy See and the PA on the establishment of an “embassy” took effect.
During a 2015 meeting with Abbas, the Pope referred to Abbas as "an angel of peace", causing outrage on social media.
The Vatican later explained that the reference was mistranslated, and in fact was meant as encouragement for Abbas to pursue peace with Israel.
Posted by Bill Salus at 5:09:00 AM