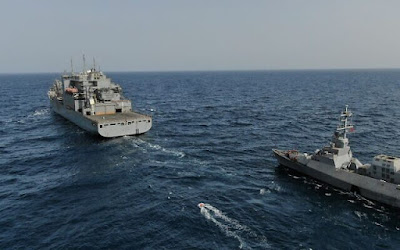 The American and Israeli navies began a four-day joint maritime exercise in the Red Sea on Monday, less than a month after Defense Minister Benny Gantz said Iran’s maritime activity in the area was the “most significant” in a decade.

“The exercise is a bilateral training event between US 5th Fleet and Israeli naval forces that focuses on mission planning, maritime interdiction and other drills at sea,” a statement said from the US 5th fleet said. The Israel Defense Forces confirmed the drill, saying Israeli vessels would “participate in a variety of missions alongside [US 5th Fleet] ships and a refueling tanker.” (Read More)