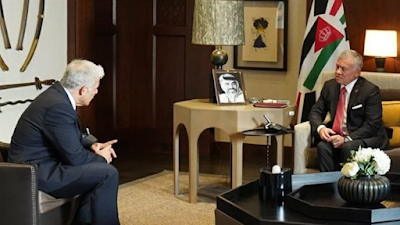 Israeli Prime Minister Yair Lapid’s meeting with King Abdullah on 27 July could see negotiations being announced shortly between Israel and Jordan to create a single territorial entity encompassing Jordan, Gaza and parts of the West Bank.

This newly created entity -designated The Hashemite Kingdom of Palestine –together with Israel – will constitute the elusive and previously unattainable two-state solution – pursued by:

- finally ending the conflict over the division of former Palestine between Arabs and Jews begun with the defeat of Turkey in World War 1. READ MORE