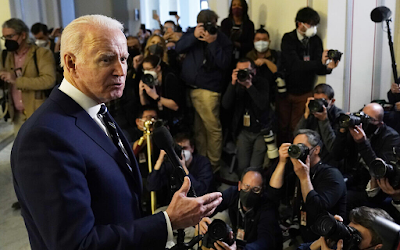 Since he entered office, and even before, US President Joe Biden has made a point of insisting that Iranian escalations in the past several years are a direct result of his predecessor Donald Trump’s decision to pull out of the 2015 nuclear deal.

Interviews and briefings with Biden officials on Iran policy were almost sure to include a reference to the former president’s 2018 withdrawal from the deal, known formally as the Joint Comprehensive Plan of Action (JCPOA).

But this week, the White House found it necessary to double down on the message, with press secretary Jen Psaki reading a prepared statement to that effect during her Wednesday briefing.

“What we’d like to remind the public of is why we are at this point now,” she began. “None of the things we’re looking at now — Iran’s increased capability and capacity, their aggressive actions that they have taken through proxy wars around the world — would be happening if the former president had not recklessly pulled out of the nuclear deal with no thought as to what might come next.”

So important was it for the Biden administration to get this message through that it leaked its plans several hours in advance to the Axios news site, giving it extra time to snowball as an exclusive report first. READ MORE