Were reports of a Jordanian coup a wake-up call for Israel? 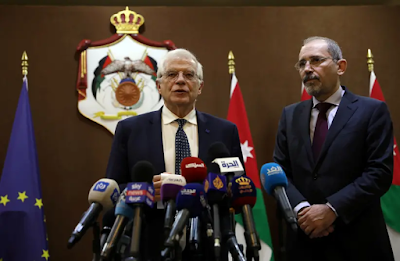 The house arrest of Jordan’s King Abdullah’s half-brother, Prince Hamzah bin Hussein, for actions targeting the security and stability of a key Israeli and United States ally reverberated globally and regionally.
Once the dust settled, it almost seemed as if the story had been overblown particularly given that Prince Hamzah did not appear to have the support of the military, a necessary ingredient for the success of a Jordanian coup.
“Without support from the military a coup is not a coup,” said Nimrod Novik, a chief adviser to president and prime minister Shimon Peres.
But the poor economy in Jordan, made worse by the corona pandemic and its hosting of a large number of refugees from the Syrian conflict in the last decade, has created the perfect breeding ground for a potential crisis. According to analysts, former diplomats and security personnel, Jordan’s stability should always be an Israeli concern.
Saturday’s events in Jordan, therefore, should be a wake-up call to Israelis to pay more attention to its immediate neighbor. Israel’s longest border is with Jordan, where the Hashemite Kingdom provides Israel an immediate buffer zone of strategic depth between it and Iraq and Iran.
Without Jordan, some speculated Iran could be entrenching itself along that Jordanian border as well as the Syrian one. According to foreign sources, Jordan provides Israel with an air-route to attack Iranian military proxies in Syria.
“We should always be concerned about what happens in Jordan,” said former US negotiator Dennis Ross, who served during the Obama, Clinton and Bush administrations. “Jordan’s position has been pivotal and its stability is essential.”
If Israel can’t count on Jordan to maintain security along that border, then that changes the country’s entire military strategy, said Ross, who is a distinguished fellow at the Washington Institute for Near East Policy. The stakes are high here for the United States and for the Gulf nations as well, he said. READ MORE
Posted by Bill Salus at 5:47:00 AM