Eli Beer: 'We need to prepare ourselves to respond in mass casualty incidents' 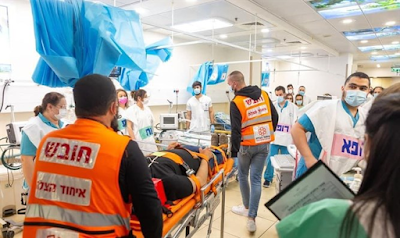 On Tuesday night, United Hatzalah, in partnership with the Galilee Medical Center, security forces, and the municipality of Nahariya, held a joint training exercise on the beach promenade in the southern part of the city.

The purpose of the exercise was to train the first responders from all partnering organizations and the medical staff from the hospital in responding to an imagined terror attack resulting in a mass-casualty incident on the promenade.

Dozens of EMTs and paramedics, as well as members of United Hatzalah’s Psychotrauma and Crisis Response Unit, participated in the surprise drill and provided medical care for the 30-plus people who were pretending to be injured in the incident. The scenario which was chosen was a marine infiltration by terrorists into the beach of the northern city.

After receiving treatment at the scene of the attack by arriving first responders, none of whom knew about the drill in advance, the “injured” were transported by United Hatzalah ambulances to the Galilee Medical Center where the staff received the patients in coordination with United Hatzalah’s Dispatch and Command Center.

According to Galilee Medical Center Spokesperson Gal Zaid, nearly 100 members of the medical staff from the hospital took part in the drill and continued providing care for those patients, honing their skills in providing treatment for severe trauma.

“The training drill was successful and incredibly helpful in providing our volunteers with a chance to hone their skills in treating severe trauma victims, which is thankfully not something that we do every day,” said the Nahariya Chapter Head of United Hatzalah Menachem Goldberg.

“Following the drill, we will be holding a debriefing this week in order to review what transpired in depth and continually improve upon our medical response time and quality of care. I think every volunteer who participated in the drill last night learned a lot. Thanks to training exercises such as this, should a situation like this take place in real life, G-d forbid, we are now more prepared on an individual as well as a cross-organizational level to provide better and faster care.”

President and Founder of United Hatzalah Eli Beer spoke about the importance of training drills like this one.

“These training drills are incredibly important in giving our volunteers first-hand experience in working in partnership with other forces that respond to mass casualty incidents,” he said. “These situations are not ones that occur every day thank G-d.”

“There are plenty of volunteers who have never experienced the chaos of such a scenario. While that is a good thing, we need to prepare ourselves and our volunteers with the ability to know what to do if they should find themselves in such a scenario.

“Working as a first responder on a single person is one thing, working together with dozens of other first responders, from the police, the military, the regional hospital, and other organizations is completely different. The more joint exercises like this that we do, the better the cross-organizational cooperation will be during a real-life incident, and that will result in the patients receiving better care faster.”

United Hatzalah also thanked the Nahariya municipality, the Galilee Medical Center, and the police for their cooperation and collaboration in conducting the drill.