The state TV report gave little detail beyond confirming that Iran had made good on its threat to reduce cooperation with International Atomic Energy Agency inspectors in a bid to pressure European countries and US President Joe Biden’s administration to lift economic sanctions and restore the 2015 nuclear deal.

Iran has said it plans to cease its implementation of the “Additional Protocol,” a confidential agreement between Tehran and the IAEA reached as part of the landmark nuclear accord that grants the UN inspectors enhanced powers to visit nuclear facilities and examine Iran’s program.

It remains unclear exactly how access will be limited. Iranian Foreign Minister Mohammad Javad Zarif said the IAEA would be blocked from accessing its network of surveillance cameras at nuclear sites. The Atomic Energy Organization of Iran, Tehran’s civilian nuclear agency, has promised to keep the footage for three months, then hand it over to the IAEA — but only if granted sanctions relief. 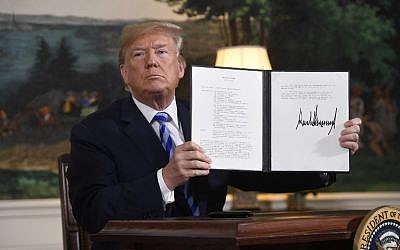 US President Donald Trump signs a document reinstating sanctions against Iran after announcing the US withdrawal from the Iran nuclear deal, in the Diplomatic Reception Room at the White House in Washington, DC, on May 8, 2018. (AFP PHOTO / SAUL LOEB)

Nearly three years ago, former US President Donald Trump unilaterally withdrew America from the nuclear accord and reimposed sanctions on Iran that have crippled its economy.

To ramp up pressure on the Biden administration, Iran has announced gradual violations of the 2015 agreement. Over recent weeks, Iran has started enriching uranium up to 20% purity, a technical step away from weapons-grade levels. It is also spinning advanced centrifuges and producing uranium metal, a component of a nuclear warhead. READ MORE