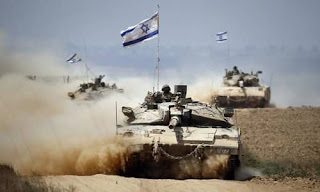 The Israeli military on Tuesday remained on high alert along the northern border amid fears that the Lebanese Hezbollah terror group would try to carry out an attack, following an alleged attempted assault the day before in a contested area on the frontier.
Also Tuesday, Lebanese Prime Minister Hassan Diab accused Israel of carrying out a “dangerous military escalation” the previous day and thereby violating United Nations Resolution 1701, which ended the 2006 Second Lebanon War.
“I fear that the situation will deteriorate in light of the severe tension on our borders with occupied Palestine,” Diab wrote in a statement, calling for caution.
The Lebanese prime minister, who is supported by Hezbollah, also accused Israel of seeking to give the international peacekeepers in Lebanon, known by the acronym UNIFIL, additional powers in the country and change the “rules of engagement.” UNIFIL’s mandate to operate in Lebanon is due to be reviewed and renewed next month by the UN Security Council. 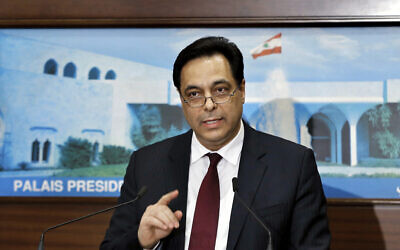 Lebanese Prime Minister Hassan Diab speaks during a news conference after his government was announced, at the Presidential Palace in Baabda, east of Beirut, Lebanon, January 21, 2020. (AP/Bilal Hussein)
According to the Israel Defense Forces, on Monday afternoon a group of Hezbollah operatives infiltrated a short distance into the Israeli-controlled Mount Dov region, also known as Shebaa Farms, before IDF troops opened fire at them — apparently not hitting them, but forcing them back across the border.
The incident appeared to be an attempt by the Iran-backed Hezbollah to exact revenge for the killing of one of its members in Syria last week in an airstrike it attributed to Israel. READ MORE
Posted by Bill Salus at 5:19:00 AM