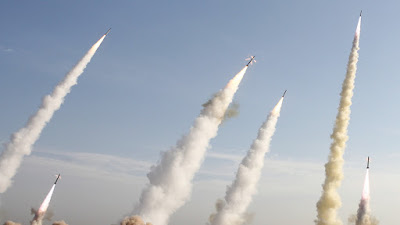 Palestinian terrorists in the Gaza Strip fired 13 rockets into southern Israel before dawn on Wednesday, eight of which were intercepted by the Iron Dome system, the Israel Defense Forces said. The attack apparently came in response to Israel signing peace deals with the United Arab Emirates and Bahrain.

The projectiles were fired over the course of half an hour, prompting the second of two waves of overnight strikes by the Israeli Air Force on Hamas targets across Gaza.

The predawn attacks from the Strip triggered sirens at least five times over a half-hour period — from roughly 4:30 a.m. to 5 a.m. — in the town of Sderot and communities in the Eshkol and Sha’ar Hanegev regions early Wednesday. The IDF said several volleys were fired, totaling 13 rockets. Soldiers operating the Iron Dome missile defense system intercepted eight of the incoming projectiles, the military said.

It was not immediately clear where the other five rockets struck. There were no immediate reports of injuries or damage, indicating they likely hit empty fields.

Despite the overnight rocket attacks, schools opened as usual for students in communities surrounding the Gaza Strip, local officials said.

No Palestinian terror group took responsibility for the rockets, though both Hamas and Palestinian Islamic Jihad put out statements in support of them, indicating they’d at least given their tacit approval for the launches.