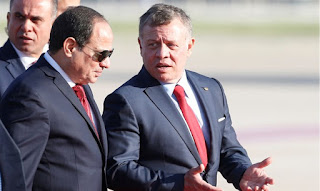 Jordanian Foreign Minister Ayman Safadi warned that Israeli Prime Minister Binyamin Netanyahu's pledge to annex the Jordan Valley if re-elected would drag the region into violence, reports AFP.
"Netanyahu's intention to apply Israeli sovereignty over the Jordan Valley and the northern Dead Sea" would "push the whole region towards violence", Safadi said, condemning the election pledge.
Netanyahu held a press conference Tuesday evening to make a "dramatic statement about the Trump Administration's "Deal of the Century."
"We are on the eve of the elections. President Trump said he will present his Deal of the Century few days after the election and it is just around the corner. This presents us with a great challenge and a great opportunity to apply Israeli sovereignty to Judea and Samaria and other areas," Netanyahu said.
The Prime Minister announced that after the elections he would apply Israeli sovereignty over the Jordan Valley and the Dead Sea area.
A senior United States official responded to today's announcement by Prime Minister Binyamin Netanyahu in which he called the Deal of the Century an "historic opportunity" to apply Israeli sovereignty in parts of Judea and Samaria.
"There is no change in United States policy at this time," said the official. "We will release our vision for peace after the Israeli election and work to determine the best path forward."
Posted by Bill Salus at 4:49:00 AM