Erdan: It is important to show the true face of Iran 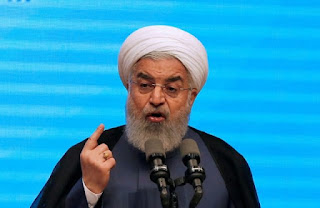 Public Security Minister Gilad Erdan (Likud) on Tuesday morning emphasized that the campaign against Iran is fought with weapons - but also by raising awareness.
"The campaign against Iran is not just [military] attacks, it is also a campaign of awareness.," Erdan told Reshet Bet.
Regarding Israeli Prime Minister Binyamin Netanyahu's revelation of a new Iranian nuclear arms site, Erdan said: "When the President of France does everything to legitimize Iran and give it a [monetary] credit line - it is important to show its true face."
Regarding the possibility that US President Donald Trump will meet Iranian President Hassan Rouhani, Erdan said: "When it's part of a campaign to put maximum pressure on Iran in order to completely change the nuclear deal, then it definitely is in Israel's interests as well."
On Monday, Israel's Foreign Minister Yisrael Katz (Likud) urged world powers "to immediately announce the activation of the existing mechanism for discussing breach of the agreement and to lead the cancellation of the agreement and joining with the US sanctions against Iran."
"History shows time and again that surrendering to tyrants results in violence and not peace. The world must unite and stop Iran's efforts to attain nuclear power and its support for regional and global terrorism."
Posted by Bill Salus at 4:16:00 AM